Hiking through Caves: At Pinnacles, there are two 'cave trails' (Balconies Cave Trail and Bear Gulch Cave Trail) that require flashlight. This hike goes through only one of these saves: Bear Gulch Cave. The caves are open only in select months, so check Cave Status. Caves are closed for the protection of Townsend's big ear bats that reside in them. Caves are open for a limited period: twice an year for at least one week and up to four weeks each March and October, depending on the presence of the colony of bats.

I visited both caves in March 2010 — there was about 5 to 12 inches of water in some section of Bear Gulch Cave. I was able to hop on stones most of the time but there were some portions where my feet got wet. Rubber slippers would be handy. The park website warns that sometimes there is knee-deep water inside the caves. So be prepared.

Best time to visit: Most of the trails are in the open. So avoid summers — it's quite hot. Also check out Cave Status.

Parking: In March 2010, parking fees was $5 per vehicle. The parking lot close to Bear Gulch Day Use Area was full. March is a popular month for visiting Pinnacles. There was an overflow parking area next to the East Entrance. The park provided shuttle service between these points. It took us about 20 minutes one-way waiting for the shuttle and traveling in it. 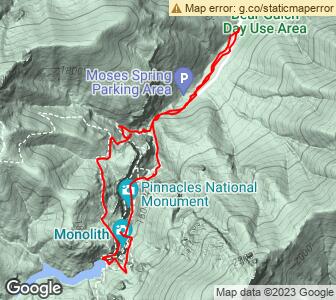 Location: 2.9 miles from East Entrance of Pinnacles National Monument . No street address. Parking area is visible in Google Maps if you zoom in sufficiently.

1) To Eastern Entrance of Pinnacles (borrowed from Pinnacles Official Website):

From the San Francisco Bay Area: Take Hwy 101 south through the city of Gilroy to Hwy 25 south. On Hwy 25, go through the town of Hollister and continue about 30 miles to Hwy 146. Turn right on Hwy 146, then turn left into the Pinnacles Campground to check in at Pinnacles Visitor Center. From the campground, the Bear Gulch Area is 3.5 miles further into the park along Hwy 146.

From the South: Take Hwy 101 North to the town of King City. Exit at 1st Street. Turn right toward King City. Continue straight until 1st St turns into Bitterwater Rd (Monterey County G13). Follow Bitterwater Rd until it intersects Hwy 25. Turn left on Hwy 25 (North) and follow for ~15 miles. Turn left onto Hwy 146 to enter the monument. Turn left into the Pinnacles Campground and check in at Pinnacles Visitor Center. The Bear Gulch Area is 3.5 miles further into the park along Hwy. 146.

Capacity: Over 30 cars may be parked here. On busy days, the park runs a shuttle service from the eastern entrance to various trail heads.