A strenuous day hike to the tallest peak in continental USA.

Mt Whitney (14,505 ft) is the highest peak in continental USA. On 16 August 2010, I finished a day-hike to Mt Whitney with three friends. It was an incredible experience! We walked about 21 miles with 6400 ft total elevation gain. Each of us carried 5+ liters of water in our backpacks. And I was wearing my Vibram Five Fingers throughout the hike.

In terms of difficulty, Mt Whitney day hike was clearly a notch above Half Dome and Grand Canyon day hikes, both of which are 16 miles and 4800 ft total elevation gain. Apart from distance (22 miles) and elevation gain (6,400 ft), a major challenge at Mt Whitney is adaptation to high altitude — when oxygen gets low, our brains swell and our bodies become lethargic. Making constant progress in such conditions requires a fair amount of mental strength and physical stamina.

We drove from Mt View, CA to Whitney Portal (8360 ft), which lies 13 miles to the west of Lone Pine, CA. Initially, our plan was to take one car. However, our group of four had so much stuff that we needed two cars! In hindsight, we could certainly have reduced our gear to fit one car.

At Lone Pine, two of us went ahead to pick up the permit from a Night Box (see instructions on permit if you avail of this option). The other two went to Whitney Portal to pitch a tent at a walk-in campsite that did not require advance reservations. We were lucky to get a campsite at night.

Cell phone coverage was unreliable at Lone Pine. I could not get a signal anywhere. So we had difficulty in coordination. Somehow, all of us got together at the campsite parking lot by 11pm. After stashing all our food in bear-proof boxes, we went to sleep.

I was not feeling too well. My throat had been mildly sore for the last three days. I had started to wonder if I should actually attempt Mt Whitney the next day. I remained at Whitney Portal (8360 ft) to acclimatize while my friends hiked 6 miles round trip to Lone Pine Lake (10,120 ft). I made a short trip to Lone Pine to pick up some food supplies that we were short of.

We wanted to get ready the next morning in the least possible time. So all of us packed our backpacks. We slept in clothes we would use the next day for our hike. We had breakfast material in four different bags so that we could get ready swiftly in the morning. We went to sleep at 8pm. By nightfall, I had decided to hike as much as possible the next morning.

In hindsight, my friends should have stayed with me at the campground on Day 2, instead of doing their 6-mile hike. They should have taken short naps throughout the day to catch up on sleep. Day 1 had been quite long: driving, coordinating and setting up tents. Our sleep on the night of Day 1 had been disturbed by early morning risers who start hiking Whitney as early as 1am. On the night of Day 2, we ourselves would get very little sleep, from 8am to 2pm — several fellow campers would not sleep as late as 10pm.

We got up at 2:00am. It took us 30 minutes longer than we expected to pack the tent, get ready and have breakfast. We started the hike at 3:30am. We were joined by several other groups. We formed a file of twenty odd hikers going up Mt Whitney Trail. All of us had head-mounted flashlights.

We covered the first few miles at brisk pace. Within 3 hours, we covered 6.1 miles to reach Trail Camp (12,000 ft). By this time, it was dawn and we no longer needed flashlights.

Till Trail Camp (12,000 ft), I was in good spirits and unaffected by altitude. All concerns pertaining to my throat infections had vanished - I was feeling good. Soon after, we started climbing the famous 97 switchbacks to reach the summit. By the tenth of twelfth switchback, I realized that I had become quite slow. Actually, this was the first time I was at altitude higher than 8,800 ft (Half Dome). So I had no idea of what to expect. I started taking a break after every 20 to 30 steps. Soon, I realized that I would not be able to finish this hike in this fashion. So I made a resolve to take a break only after covering between 0.2 to 0.3 miles. To keep track of distance and elevation, I had a Garmin 305 with me. This trick worked. I slowed down significantly but I made constant progress. Maintaining a smiling face was helpful.

By the time the summit was about 1.5 miles away, I started feeling quite sleepy. I kinda wobbled a few times. Thanks to hiking poles, I did not lose balance. The last mile was particularly slow for me, as we inched towards the summit. We reached the top at 1pm. We signed our names in a log book outside a hut that lies atop the summit.

The return journey was equally arduous. I took several breaks, including 5-minute and 10-minute naps along the switchbacks. Keeping myself awake and making constant progress was challenging. I did not have any nausea or uneasiness. However, there was a constant dull headache and my head felt as if it were clamped from all sides. My body told me that I needed sleep and rest, but I had to continue hiking to reach Whitney Portal. I munched on chocolate bars, fruits and sandwiches for fuel and to keep myself awake.

From Trail Camp (12,000 ft) onwards, I picked up speed. By this time, I was quite exhausted but my body had kicked into some kind of auto-pilot mode. I felt I could hike for several more hours! By the time I reached Lone Pine Lake, it had become dark. I hiked the last three miles using a headlamp, reaching Whitney Portal at 9:30pm. It had been eighteen hours since we started the hike at 3:30am. Two of my friends had reached 1.5 hours earlier — they had taken 16.5 hours overall.

At Whitney Portal, fellow campers asked us to be careful as there was a bear hanging around trying to snatch backpacks of hikers! We soon shifted all of our food from the bear-proof containers to our cars while keeping an eye out for bears. And we hurried to Lone Pine to get some dinner before restaurants would close. After dinner, we reached out hotel (Best Western at Lone Pine), took showers and slept merrily.

Day 4 — Travel
We got up at 7am at Best Western in Lone Pine, CA. Their continental breakfast was excellent. We drove back to Mountain View in about eight hours, going through Yosemite, which required a pass for $20.
Miscellaneous Information

Preparation: Some websites with plenty of information: Mt Whitney Trail Info — WhitneyZone FAQ — Maps and Diagrams for water availability, campsites, switchbacks, and so on. Whitney Permit.

Water: I carried 6 liters of water in my backpack, making it quite heavy. Several campers advised me to carry a water filter in future. Check out Water Availability TOPO Map for Mt Whitney Trail.

We cached some water at Trail Camp, behind some rocks. There are enough rocks around the campsite to stash some water away.

High Altitude: I had never been above Half Dome (8,842 ft). For Mt Whitney hike, our campsite itself was at 8,360 ft. We then gained 6,200 ft to reach Mt Whitney at 14,505 ft. Three out of four people in our group were walking at such high altitude for the first time! I had gone into the hike imagining that people either get sick or they remain healthy, as if altitude sickness were black and white: you get it or you don't get it. In reality, we all get affected, some more than others. Only if the symptoms are severe is the condition classified as sickness.

Terrain: The first 3 miles to Lone Pine Lake were on soft ground, making it the fastest section of the entire hike. The next 3 miles to Trail Camp were stony. Next to Trail Camp, there was a half-mile section that was relatively flat. Subsequently, the switchbacks all the way to Mt Whitney were on stony terrain. Check out Whitney Trail Videos below!

I finished the entire hike in the KSO-Trek model. I wore socks for cushioning because these shoes had earlier given me blisters. My previous VFF's were KSO and never gave me any problems. I had decided to carry both for the hike. At the last moment, I decided to leave my KSO's behind to reduce weight.

Clothing: We hiked in mid-August. I was adequately dressed in three layers: a nylon t-shirt, a lightweight fleece jacket and a regular jacket with plenty of pockets. I also had a base layer made of Merino Wool with me. I decided that would make too warm and that I didn't need it for this hike. My decision was sound. I also had gloves, a warm cap and a hat. The warm cap and the fleece jacket was helpful in keeping me warm during pre-dawn and post-dusk hours. The hat wasn't really necessary. For my legs, I had a pair of convertible pants.

Hiking Poles: All four members of our group used hiking poles. We unanimously agreed that poles saved our knees in a big way during descent, especially over stone steps. None of us felt any muscular aches and pains, and we all attributed it to hiking poles!

Side Trips: You may climb up to Keeler Needle, which is a class 2/3 scramble for about 500 ft. We did not know about this scramble and didn't try it.

3-day Hike: A much easier ascent to Mt Whitney is feasible as a 3-day hike:

Whitney Trail Videos: Pete Wagenleitner from Australia has made a series of videos covering the entire Mt Whitney Trail! I highly recommend these videos to those who have never hiked Mt Whitney before. They give a good idea of the terrain: Playlist of Mt Whitney Trip. 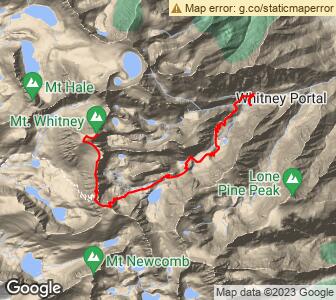 Capacity: Dozens of cars may be parked along Whitney Portal Road.