An adventurous hike along rocky beaches possible only in low tide conditions. Few people go along this route, so the route provides great solitude. 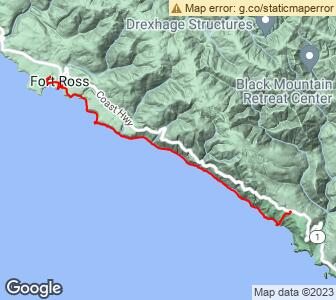 Sonoma's Lost Coast hike is about eight miles long from Fort Ross Historic State Park visitor center in the north to Russian Gulch State Park in the south. Most of the route is along rocky beaches with intermittent scrambling over big boulders. The hike can be done only in low tide.

Book: The hike is described in detail in Section 5 (Sonoma County, pages 184—187) of the book Hiking the California Coastal Trail, Volume 1: Oregon to Monterey (2nd Edition, 320 pages, 2002) by Bob Lorentzen and Richard Nichols. According to the authors,there are two spots that require low tide: about 1.5 miles into the hike, crossing a rocky spot requires tides lower than 3 ft; about 3 miles into the hike, a spot requires tides lower than 4.5 ft.

Campsite: Reef Campground at Fort Ross Historic State Park would have been ideal. However, in July 2011, it was closed due to CA budget cuts. Luckily, there was a large walk-in private campground about 5 miles north: Ocean Cove Campground in Jenner, CA — Yelp Reviews.

Route: We followed the directions in the book and had no trouble following the route. However, at one point, we deviated:

Challenge: On page 187, the book mentions a steep climb along a chute next to the "domed rock outcrop" at 5.75 miles. This climb was fairly challenging due to the load we were carrying: our backpacks and hiking poles. Immediately afterwards, we were supposed to climb down the same height to reach a beach. We decided that it was too risky to climb down. Luckily, there was a trail going eastwards (towards Highway 1), which we followed. After about 0.3 miles (which was the steepest portion of the climb), the trail vanished but we continued cross-country along a fence. Soon, we reached Highway 1 where a prominent sign said "Leaving Sonoma Coast State Beach". The sign is near the intersection of Highway 1 and Myers Ranch Road.

California Coastal Records Project has a Picture of the spot where we deviated from the standard route and went eastwards (note the "domed rock outcrop"). I suppose the climb down can be made safer with a rope.

End of Trail (our hike): This location is different from the ending location in the book: Myers Grade Road and Coast Highway (Hwy 1), CA. From this point, one of our group members walked along Highway 1 for 1.8 miles of a twisty windy road downhill to reach the proper "End of Trail" (see below), where we had parked our cars.

Notes: Measurements by Garmin Forerunner 305 turned out to be longer than the measurements in the book. For example, we reached the "domed rock outcrop" at 6.5 miles instead of 5.75 miles.

Location: Fort Ross Historic Park in Jenner, off CA-1 . No street address. Parking area is visible in Google Maps if you zoom in sufficiently.

Capacity: Dozens of cars may be parked here.

Capacity: Over 20 cars may be parked here.