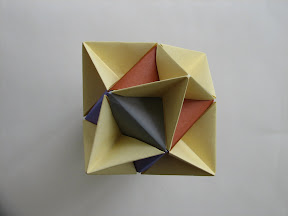 Instructions: The model is composed of a basic Sonobe Cube along with 'Alpha Units', which are described on Page 74 in the book Multidimensional Transformations: Unit Origami by Tomoko Fuse.

Comments: The alpha units do not fit snugly into the cube. So the final model is not as neat as most other modular origami models.